Burglary is the breaking and entering into a property with the intent to commit a felony. 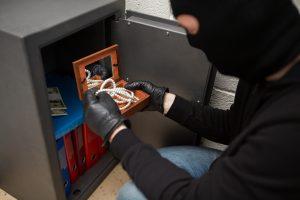 Burglary is a crime defined as the unlawful entry into a building or structure with the intent to commit a crime. Physically breaking into a structure is not a requirement for a person to be charged. The offender only has to enter a structure, (even if it is through an open door or window) with the intent of stealing something or causing harm to another person.

Residential – involves a person entering into a home or living space with the intent to steal something or commit another crime.

Commercial – is defined as a person entering a store, office building, or other structure used for business purposes, with the intent to steal something, or to commit another type of felony.

Changing the price tags on merchandise, tampering with security devices, or removing items from packaging in order to steal them are all considered commercial.

Each state has a specific definition of what constitutes a burglary and certain elements are usually required: (1) an unauthorized entry (“ breaking and entering”), (2) into a structure, (3) with the intent to commit a crime.

(1) This element of burglary involves a person breaking into or entering a structure without authorization from the owner and with the use of force. Simply creating an access point into a house (i.e. breaking a window or kicking in a door) does not fulfill the legal definition for this crime. The offender must either put his entire body or place a body part into the structure in order to constitute burglary since this fulfills the requirement of a “physical entry”.

(2) The offender must physically enter housing, buildings, or other types of structures, including garages or sheds. Most states do not consider abandoned buildings in their definitions; this kind of unlawful entry is most often classified as trespassing.

(3) To fulfill the intent element of burglary, the offender must intend to commit a crime once inside the structure they have entered. These crimes may include anything from theft to assault.

We Seek to Protect Your Future

Set up a consultation today

When all of the elements of burglary are evident in a crime, most states determine sentencing for the crime based on the seriousness of the offense.

Entering someone’s home with the intent to commit theft or violence is considered a felony.

A charge for second degree burglary includes the same elements as first degree except the unlawful entry would have to take place at a commercial building or place of business. Second degree may also be charged when the perpetrator enters a commercial business building with the intent to commit arson or steal a firearm.

This charge is given when the perpetrator, enters any structure, whether residential or commercial, with the intent to commit a crime other than arson, theft, or violence. Third degree burglary is a felony charge in many jurisdictions.

All jurisdictions do not utilize the charge of fourth degree. Those states that do, can charge an individual for simply breaking and entering into a structure without committing another crime, or having the intent to steal something. Fourth degree burglary is considered a misdemeanor.

Differences Between Theft, Burglary, and Robbery

While these terms are used interchangeably by people, there are subtle differences between them according to the law.

A jury or judge or jury may decide on the sentencing based on a number of considerations, including: the severity of the crime, the value of the property stolen, any previous criminal history, and whether an act of violence was involved during the crime.

Being charged with burglary is a serious allegation that can result in imprisonment and can destroy your reputation. At Haley Law Firm, LLC, we understand that everyone can make an unlawful mistake that could negatively affect your future. Our group of experienced attorneys will work with you to safeguard your rights and get the best possible result for you. Call today to find out how we can help.