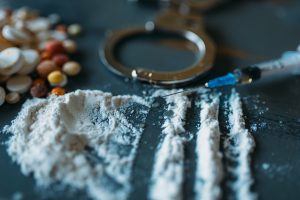 Drug crimes are offenses that include the unlawful possession, use, distribution, and manufacturing of certain drugs commonly referred to as “controlled substances.” These drugs can include, but are not limited to: marijuana, cocaine, heroin, and methamphetamine. Distribution of drug paraphernalia is also considered a crime.

Drugs are classified into Schedules (categories) based on the potential they have for addiction and abuse.

Don't Face a Drug Crime Charge Alone
Work with us

Both state and federal authorities have enacted laws against drug crimes, and punishments vary based on the severity of the drug crime. While some state laws appear to be similar concerning drug crimes, their differences are distinct. When accused of committing a drug crime, you might be charged with violating a state’s law or violating federal law.

If you are accused of a state crime, the state in which it occurred will prosecute and use its penalty guidelines. However, if you are charged with a federal crime, your case will be tried in federal court where the penalties are much harsher, particularly if you have previous convictions.

If you or someone you care about has been charged with a drug crime, contact Haley Law Firm, LLC as quickly as you can. We can help you to better understand the charges and potential penalties. We will work on your behalf to get the best attainable legal outcome for your case. Do not hesitate to call today to set up your free consultation. We are here to help!