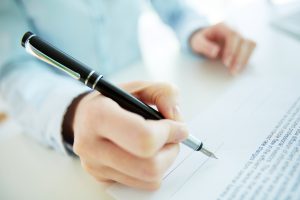 Forgery is the criminal act of falsifying something to deceive another person or entity. It occurs when a person alters writing, produces fake art, or counterfeits an object of value in order to defraud another person. A forged item is also referred to as a “false writing.” The most common form of forgery is signing another person’s name on a legal document without permission. In most jurisdictions, a person cannot be charged with this crime unless it can be proven that s/he intended to deceive or defraud another individual.

In order to charge a person with forgery, there must be certain elements present:

Every altered document is not considered a forgery; only writings that have a legal significance. They include but are not limited to:

Fight Back Against a Forgery Charge

People are aware of forgery in relation to art. Copying, drawing or painting pictures that imitate a famous piece of art is not itself a crime. However, trying to sell a replica of an original work as if it were the real thing is considered forgery and is illegal. This is not as uncommon as you might believe; some forgeries have been done so well that they have even fooled experts who have unknowingly hung them in museums.

Identity theft is also considered a type of forgery because the theft of a person’s identity inevitably requires the use of a person’s signature on official documents to perpetrate the fraud. In 1998, due to the prevalence of identity theft, Congress made this crime a federal offense.

If you have been charged with forgery, it is the prosecutor’s job to prove that you had the intention of defrauding someone by your actions. An experienced criminal attorney can help you to defend yourself during legal proceedings. Call Haley Law Firm, LLC today for a free consultation and find out how our legal experts can help to protect your rights.