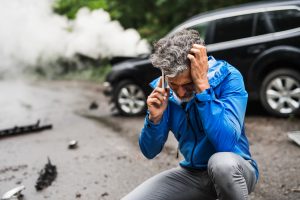 No one wants to be involved with any tragedy involving an automobile, but unfortunately, sometimes this happens. During these situations, one hopes that it is a mere fender bender that is accidental with no injuries. However, there are times where someone is hurt or even killed. In these situations, vehicular manslaughter & murder might be brought up as charges. This will almost certainly be the case if the victim was hurt intentionally. Even if the harm wasn’t intentional, charges could still result.

What’s the Definition of These Crimes?

Vehicular murder, referred to officially as “vehicular homicide,” is a crime where a person other than the driver dies from a collision. This can be as a result of obvious murderous intention, but it also applies to unintentional death that was caused by a criminal level of negligence. Most of the time in the states of South Carolina & Virginia when negligence is involved the charge will be unintentional vehicular manslaughter, or some form thereof.

In South Carolina, reckless vehicular homicide is an umbrella term for any criminal charges that result from a victim dying during an accident. Every reckless vehicular homicide charge in South Carolina is a felony and the penalties can vary greatly. The penalty in some circumstances can be as low as $1,000 in fines and a 5-year loss of license (which can be challenged for reinstatement after one year in some cases) or be as severe as 10 years in prison, $5,000 in fines, and a full 5-year loss of driver’s license after getting out of prison.

You are Innocent Until Proven Guilty
speak with us

The specific details around a case will help to determine the severity of the charge and the penalty. To be convicted the prosecution must not only prove recklessness by the driver but also direct causation. That the person’s reckless action is what caused the death.

In Virginia, causation doesn’t need to be proven in the same way it is in South Carolina. If the driver is under the influence of any drugs or alcohol and ends up killing someone chances are they will be charged with vehicular homicide. In the state of Virginia, this charge follows many of the same penalties and burdens of proof as involuntary manslaughter.

In this state vehicular manslaughter is considered not only a felony but a class 5 felony. While the circumstances of a case can change the numbers slightly, generally speaking, a driver in Virginia who is convicted of this crime will be facing up to 10 years in prison along with $2,500 in fines, and permanent loss of license.

For the charges to be found as aggravated, the prosecution does have to prove more. They need to prove that the way the driver behaved was not only reckless but was so on such an unbelievable and gross level as to warrant additional penalties. In this case, the fine remains $2,500 but the sentence is up to 20 years in prison.

If you find yourself possibly being charged with vehicular manslaughter & murder then it’s time to give our attorneys a call to start talking about your defense.